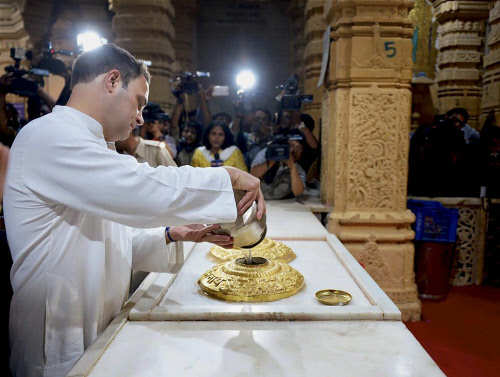 Times of India – Why traffic in religion at all? Because democracy demands it. The easy answer to the hardcore secularists is this: Indian politics is, and has always been mixed up with religion, because the majority of Indian people, our society and culture are still mixed up with religion. Unlike the hard secularism that emerged in Europe after the bloody conflicts that separated church and state, India’s softer secularism does not reject religion.

Our Constitution calls for a principled negotiation with it, rather than walling it off from the state. Secularism can easily coexist with religious sentiment — what it must oppose is communalism. Political parties, as the intermediaries between state and society, have to reach out to religious groups, which have a hold on voters.

If BJP makes a battleground out of Hinduism, Congress must be prepared to meet it there too, and assert its values. But it must be creative, not reactive.

It must not let others set the terms, because the sense of majoritarian injury can be bottomless.

Congress should engage with religion as Mohandas Karamchand Gandhi did — to use the spiritual reserves within it, to steer it towards social justice and empathy. ‘Soft Hinduism’ should be a badge of honor for Congress, because after all, Hinduism is not a weapon in the party’s hands. Whether Hinduism, Islam or any other faith, religion is a soft thing, to be held dear but not brandished in another’s face. more>